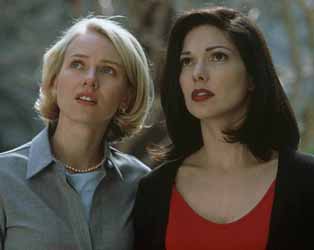 A dark and twisting tale of Hollywood ambition, love and betrayal, Mulholland Drive is one of David Lynch’s most renowned and scrutinised works. In the film’s first half, Naomi Watts plays Betty, a bright and implausibly cheerful young actress who arrives at her aunt’s supposedly unoccupied apartment only to find another woman (Laura Harring) staying there, who it transpires has been in an accident and doesn’t remember who she is.

Before the now-inseparable pair resolve what has taken place, the film shifts into a parallel realm where Watts plays Diane Selwyn, an embittered failed actress whose unrequited love for a glamorous, manipulative star called Camilla Rhodes (also played by Harring) is a source of deep inner torment. Similar to Bergman’s Persona and Altman’s 3 Women in its preoccupation with female identity and the subconscious, this is a work of ingenuity and skill, open to an enticing multitude of interpretations.