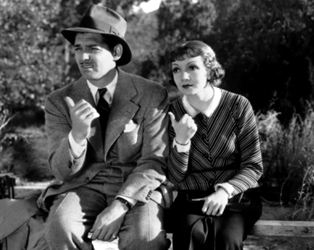 With commentary by Professor Diane Negra.

Winning a massive sweep of the 1934 Oscars, Frank Capra’s film has often been noted for helping to usher in the “screwball” cycle of the 1930s and analyzed for its gender and class politics. The road trip of heiress Ellie (Claudette Colbert) and wisecracking reporter Peter (Clark Gable) who offers to help her reunite with her aviator husband, is a mock courtship that slowly turns into a real one. Among the romantic comedy conventions that originate in the film is the figure of the “runaway bride” which will be the subject of Professor Diane Negra’s talk following the film.