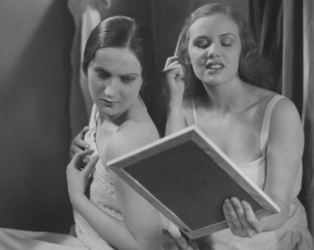 Openness about sex and sexuality was a hallmark of Weimar cinema, as in, for example, Pandora’s Box. Leontine Sagan’s cult classic was one of the first to feature lesbian themes prominently,and was also ground-breaking for having an all-female cast.

The film is set in a repressive and authoritarian boarding school, where 14-year-old Manuela (Hertha Thiele, who appeared in many controversial plays and films of the period), a new arrival, falls in love with her teacher, Fraülein von Bernburg. When their closeness is discovered by the headmistress and it is forbidden for the two to speak further, Manuela is devastated, and reacts accordingly.