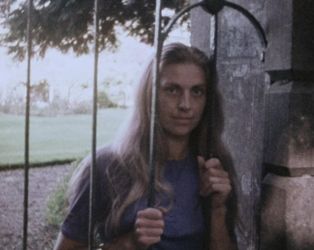 Join us for free screenings of films from the IFI Irish Film Archive every Monday, Wednesday and Saturday at 1pm. Simply collect your tickets at the IFI Box Office. All tickets are only available in-person.

In 1921 during the War of Independence an IRA man (Patrick Dawson) is pursued by Black and Tans. Finding refuge in a Cork synagogue he meets an elderly Jew (Milo O’Shea) at prayer. Produced by the Dublin Filmmakers Cooperative (which included Seamus Byrne, George Morrisson and Oscar-winning Josie MacAvin) and written and directed by Wolf Mankowitz.

A young woman (Margaret Hill) returns from London to her childhood home, a Georgian pile in Co. Cork where she is haunted by a terrifying memory. Her inner thoughts are voiced by Susannah York (in Ireland at the time filming Robert Altman’s similarly themed Images). Directed by Colin Hill, then a film editor at the BBC.