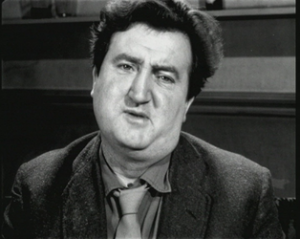 Join us for free screenings of films from the IFI Irish Film Archive every Monday, Wednesday and Saturday. Simply collect your tickets at the IFI Box Office. All tickets are only available in-person. Celebrating the centenary of the birth of Brendan Behan (1923 – 1964).

Brendan Behan (1923 – 1964) in fine, relaxed form is interviewed by Eamonn Andrews in this illuminating short film directed by Fred O’Donovan in Ardmore Studios in 1960.

In Norman Cohen’s poetic documentary, the spirit of the city is presented through the eyes of one of its most talented and colourful citizens. Written by Carolyn Swift and featuring Ray McAnally as the ‘voice of Behan’, the film captures the spirit of Behan. Interviews with Behan’s parents and his wife Beatrice add to the intimacy of the piece.