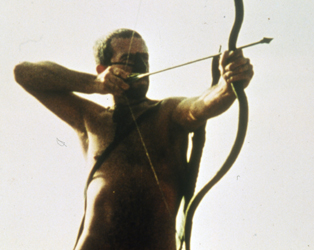 This film screened on 3rd December 2019.

This screening was introduced by Sean Kissane, Curator of Exhibitions at IMMA, and curator of Derek Jarman: PROTEST!

Having made numerous experimental short works on Super 8mm, Jarman made his narrative feature debut, co-directed with Paul Humfress, with this controversial, proudly homo-erotic, Latin-language treatment of the life and martyrdom of Saint Sebastian, a member of Emperor Diocletian’s Praetorian Guard in the 4th century who was persecuted on account of his Christianity, and whose image was appropriated in gay iconography from the 19th century. Jarman evocatively captures the scorching heat of the Sardinian locations, and the evident effect it has on his cast, while Brian Eno’s typically atmospheric score complements the director’s superb framing, pacing and ethereal slow-motion sequences.