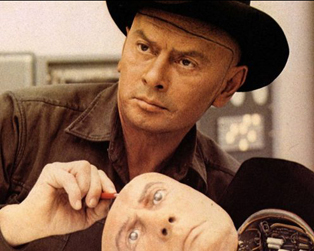 Technology run amok is a recurrent theme in the novels of Michael Crichton, and indeed Westworld, which was his directorial debut and was based on his original screenplay, can be viewed as a trial run for the writer’s later, all-conquering adventure park catastrophe story, Jurassic Park. Commonalities can certainly be located in its scenario; set in the then-future year of 1983, the film focuses on Delos, a highly realistic adult amusement park, which offers three themed ‘worlds’: Roman, Medieval and Western. First-time visitor Peter Martin (Richard Benjamin) is persuaded by friend John Blane (James Brolin) to accompany him on a vacation to the latter facility, however a series of escalating technical malfunctions sees them pursued remorselessly by the Gunslinger (Yul Brynner), an implacable killer android.