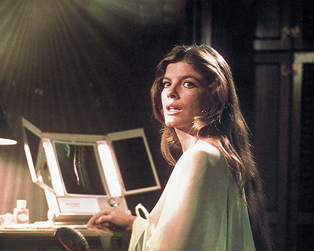 Joanna Eberhart (Katherine Ross) and her husband Walter (Peter Masterson) have relocated from New York City to the idyllic Connecticut suburb of Stepford. An amateur photographer with a rebellious streak, Katherine is bemused by the obedient and submissive behaviour of the town wives, immaculately presented and housework-obsessed, who indulge the needs of their husbands with a servility bordering on the masochistic. Bobbie (Paula Prentiss), a fellow newcomer, shares Katherine’s unease and together they attempt to uncover the mystery surrounding the wives of Stepford. Based on Ira Levin’s acclaimed novel, with a screenplay by William Goldman, the film sparked controversy from feminist groups at the time of release but can now be viewed as an important entry in the 1970s cycle of paranoid conspiracy thrillers.