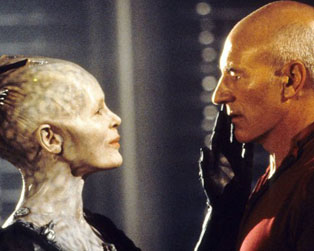 First Contact, the second cinematic outing for the Next Generation crew, proved to be one of the most effective in the entire series, and remains a beloved fan favourite. In a teasingly complex, yet deftly-handled scenario, the crew of the Enterprise must travel back in time to the year 2063 to salvage mankind’s first warp speed flight, a technological leap forward with unforeseen consequences involving the nefarious Borg, and a possible future outcome where the all-consuming biomechanical race have taken possession of Earth. Directed by Jonathan Frakes, who plays second-in-command William Riker, the premise builds on an early TV episode where Picard was captured and assimilated by the Borg, the trauma of that event resonating in Patrick Stewart’s nuanced performance.