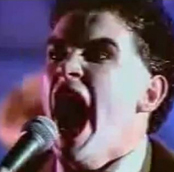 This April 30th in the IFI sees the final screening of Cobain: Montage of Heck, hailed by critics as the definitive account of Kurt Cobain’s life. On May 7th, the IFI focuses its gaze on the influence of the music industry on Ireland’s youth in the 1970s with the free Archive at Lunchtime screening of Messing with the Kids: Pop Music and Youth Culture in Ireland.

Continuing in this musical theme, this month’s blog from the IFI Irish Film Archive’s Tiernan MacBride library examines the appearance and portrayal of Irish musicians in this country’s film and television productions.

The controversial punk band The Virgin Prunes gained notoriety in 1978 when their supporting slot for The Clash in Dublin ended in nakedness, vandalism and anarchy. [1] Subsequent stage performances involving cross-dressing, rotting meat carcasses and offal-slinging gained the band condemnation and a cult following. At a time in Ireland when punk was viewed by the traditional media as a threat to a moral Catholic Society the “musical terrorism” [2] of The Virgin Prunes resonated with a younger generation experiencing unemployment, emigration and religious repression. Despite a comparatively pared-back appearance on The Late Late Show in 1979, their performance was described as “one of the angriest performances ever broadcast on Irish TV” [3] and they were subsequently banned from RTÉ. This “delightfully whimsical” [4] comedy draws on the real-life story of the legendary Irish tenor Josef Locke, who fled England in the 1950s at the height of his fame to avoid tax charges. In the film, Micky O’Neill is a concert promoter in Liverpool who must save his reputation and his livelihood by travelling to Ireland and persuading Locke to make one last come-back. Ned Beatty gives a Golden-Globe nominated performance as the famous Irish tenor and the American actor spent time with the real Josef Locke in an effort to master his character’s Derry accent. [5] He portrays Locke as an untrusting, potentially violent man who rediscovers his humanity with the help of a long-lost love. In reality, Josef Locke repaid his tax debts within a decade, but the film ends more dramatically as the singer makes his escape from the authorities with the help of a wrecking ball and a doppelganger. This short film tells the story of Ellen, a Dublin retail assistant who becomes obsessed with the frequent glimpses she catches of Bono around the city. Despite declaring “the thing is, I don’t particularly like U2,” [6] at the beginning of the film, she begins to record each sighting in a diary and admits to checking the bathrooms of a local bar for the star. Finally, she serves Bono in the clothes shop she works in and the experience proves to be a cathartic one which releases her from her fixation. The film, which stars Bono as himself, is based on a story by Gerard Beirne about his own sightings of the musician. Adapted for the screen by Kathy Gilfillan (wife of former U2 Manager Paul McGuinness) the film portrays Dublin as a vibrant, modern city on the brink of an economic boom. A sense of excitement and anticipation in the original story is linked to frequent sightings of Bono in Dublin, at a time when U2 was beginning to achieve international success, “you could tell something was happening and U2 was the start of it.” [7] Bono as himself in Sightings of Bono. Copyright Parallel Films 2000.

This documentary is a searingly honest portrayal of Jinx Lennon, a Dundalk musician whose provactive music examines subjects such as clerical abuse, social welfare fraud, drug abuse and the health system in Ireland. He suffered bad health as a child which cut him off from his sports-proccupied peers, but Lennon found solace in reading and music. These influences can be heard in his music, which strives for an authenticity providing an antidote to, “cover bands playing Oasis songs” [8] and he describes how his current position as a night porter in a Co. Louth hospital acts as a counterbalance to his on-stage ego. His lyrics are often incendiary, dividing audiences and critics, but he is portrayed in the film as a performer of integrity who embodies the inspiring writers and musicians of our age, “a dash of Pat McCabe, tablespoon of Chuck D, shot of Christy Moore, essence of Flann O’Brien.” [9] This BBC-RTÉ co-production celebrates the 25th anniversary of Live-Aid with a dramatised account of the events leading up to what would be the biggest televised international charity event in history. The film follows Bob Geldof’s launch into action to combat famine in Africa and depicts his realisation that proceeds from the charity hit single Do They Know It’s Christmas? will not be enough to alter the plight of the Ethiopian people. From this point, the film focuses on the intense working relationship between Geldof and music producer Harvey Goldsmith as they strive to make the global Live-Aid concert a reality. The piece captures the chaos, comedy and unorthodox approaches that bring this unprecedented event about and Domhnall Gleeson’s “intense and passionate” [10] portrayal of Geldof received positive reviews from Irish critics.