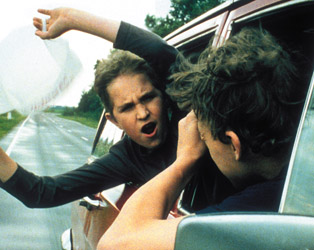 In this enigmatic and powerful film, fifteen-year-old Andrey (Vladimir Garin, who died tragically shortly after filming was completed) and his younger brother Ivan (Ivan Dobronravov) are surprised at the sudden reappearance of their father (Konstantin Lavronenko) following a decade-long absence.

While Andrey delights in the reunion, Ivan remains wary. As their father’s disciplinarian tendencies come to the fore on a fishing trip, a rift grows between the brothers in this measuredly ambiguous and ultimately devastating début.