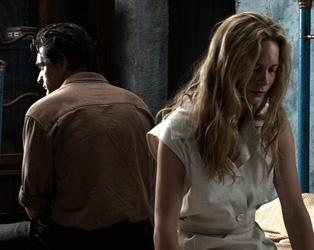 Premiered in competition at Cannes, The Banishment is an adaptation of Armenian-American writer William Saroyan’s 1953 novel The Laughing Matter, and attracted further comparisons with Tarkovsky for its plentiful use of religious symbolism.

Mark (Aleksandr Baluev) has criminal associations, while his brother Alex (The Return’s Konstantin Lavronenko) lives in seeming domestic bliss with his wife Vera (Maria Bonnevie) and their children. However, during a trip to his childhood home, Vera tells Alex that she is pregnant by another man. His response is to seek the advice of his brother, ultimately forcing Vera to have an abortion before they can rebuild their relationship, and causing further tragedy.