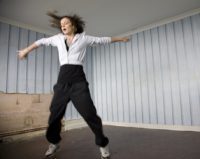 To mark the release of American Honey, the IFI is pleased to present this retrospective of the work of Andrea Arnold.

Despite her relatively small body of work, Arnold has established herself as one of the UK’s most respected filmmakers. While she follows in the realist tradition of fellow directors such as Mike Leigh and Ken Loach, her films take the characters’ situations as a given, focusing on the everyday details of their lives rather than tackling thematically the larger social issues. Her approach gives her work a refreshing and grounded honesty that eschews unwarranted sentiment in favour of natural character development and plausible narrative outcomes. By just her third short, Arnold became an Oscar-winning filmmaker, and her subsequent move to features has seen her work lauded at Cannes and many of the world’s most prestigious film festivals.

We are pleased to provide audiences with the opportunity to see these films, accompanied
by rare screenings of Andrea Arnold’s short films.