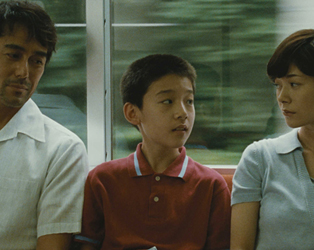 Hirokazu Kore-eda, the prolific and remarkably consistent director of I Wish (2011), Like Father, Like Son (2013) and Our Little Sister (2015), returns with another finely calibrated drama of contemporary Japanese domesticity,once again focusing on the often fraught relationships between parents and their children.

The setting is Kiyose on the outskirts of Tokyo, where failed novelist and compulsive gambler Ryôta (Hiroshi Abe) attempts to reconnect with his estranged wife Kyôko (Yôko Maki) and young son Shingo (Taiyô Yoshizawa) with limited success. He steals from his mother and abuses his sister’s generosity, yet Kore-eda is too empathetic to paint him in an entirely unflattering light, casting him as an incorrigible rogue. A turning point occurs with the imminent arrival of a typhoon, forcing Ryôta, Kyôko and Shingo to stay at his mother’s house, precipitating a reconciliation of sorts.