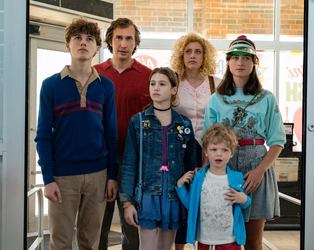 This week’s new titles at the Irish Film Institute from Friday, 9th December 2022 include Ghosts of Baggotonia, The Silent Twins and White Noise. Read on for a selection of reviews or pop in to make up your own mind!

“…observant, meticulously constructed, black-and-white homage to the area and its then creative inhabitants.” – No More Work Horse

“Gilsenan delivers a psycho-geographic slice of life, one which is receding from view and memory.” – Totally Dublin

“Though certainly at home to overcast misery, the film incorporates spooky, stop-motion animation and musical interludes that might have amused Ken Russell.” – 4/5 The Irish Times

“People tend to fixate on the reasons behind the sisters’ selective mutism. But Agnieszka Smoczyńska’s The Silent Twins, in its own impassioned and lyrical way, asks an entirely different question: is their choice really that hard to comprehend?” – 4/5 The Independent

“This is an engrossing, well-acted story – disturbing but also tender and sad.” – 4/5 The Guardian

“Baumbach has landed a sizeable white whale in his tremendously elegant and assured adaptation.” 5/5 – The Guardian