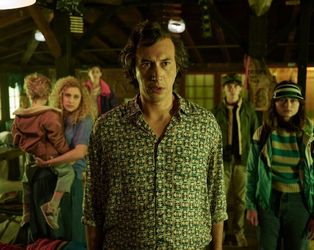 Jack Gladney (Adam Driver) is a successful, four times married college professor specialising in the field of Hitler Studies, though he has just started learning German; he is married to Babette (Greta Gerwig) and presides over a rambunctious family of children and stepchildren. Their complacency is shattered suddenly by a freak train accident and an ensuing chemical spill that forces them to flee their suburban home.

In adapting Don DeLillo’s breakout novel, winner of the 1985 National Book Award for Fiction, and a cornerstone of postmodernism, Noah Baumbach has captured the essence of a work whose themes of consumer culture, prescription medication abuse, imminent ecological disaster, and a generalised and all-pervasive societal anxiety are perhaps even more relevant today than they were at the time of the book’s publication, creating a pitch-black comedy of existential malaise.