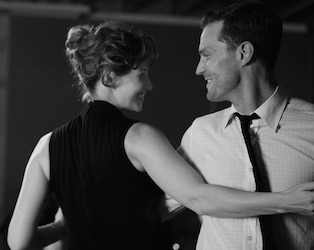 The five films have been announced as:

Each of these five films will be screened daily from 27 Dec – 5 Jan.

Tickets for these screenings are on sale now.

Sunniva O’Flynn, Head of IFI Irish Film Programming, said, “These 5 wonderful films are but the tip of the Irish cinematic  ice-berg presented throughout the year in IFI.  The films represent a healthy cross-section of current cinematic endeavour and attest to the broad catholic taste of IFI audiences.   Most welcome of course is the unqualified success of Irish language cinema here in IFI and further afield.”

Images from the titles can be downloaded HERE.

Adapted from Foster, a short story by Claire Keegan, Colm Bairéad’s debut feature centres on nine-year-old Cáit, a shy and withdrawn child who receives scant attention or affection from a family ruled by an uncaring patriarch. When she is sent to spend the summer with her aunt Eibhlín (Carrie Crowley) and her husband Seán (Andrew Bennett), she comes out of her shell, blossoming in their care, especially when Seán’s initial aloofness fades. At the end of the summer, difficult decisions and realities must be faced. This is a work of small moments and details, anchored by Catherine Clinch’s remarkable performance as the titular quiet girl, that make for a film of pure artistry, as uplifting as it is heart-breaking.

THE BANSHEES OF INISHERIN

The perils of petty grievances are imaginatively explored in Oscar-winning writer- director Martin McDonagh’s (Three Billboards Outside Ebbing, Missouri) latest comedy drama, set on the fictional island of Inisherin off the west coast of Ireland during the time of the Civil War, where old pals Pádraic (Colin Farrell) and Colm (Brendan Gleeson) have reached a confounding impasse in their friendship. Colm, tired of wasting his days in the company of the dim-witted, underachieving Pádraic, decides to cease all contact with his former drinking buddy, and devote what time he has left to the composition of music. With Pádraic in a state of disbelief, Colm is forced to offer him a gruesome ultimatum to achieve his isolationist aims.

Kenneth Branagh’s cinematic paean to the city of his birth is a bittersweet, but irresistibly charming, child’s-eye view of growing up at a time when the tension and violence of the Troubles were beginning to exert an increasing hold over everyday life in Northern Ireland. Nine-year-old Buddy (newcomer Buddy Hill) is the youngest of a Protestant family living in a mixed community in north Belfast. Ma (Caitríona Balfe) is the family linchpin while Pa (Jamie Dornan) both supports them and pays off debt by working in England, and grandparents Judi Dench and Ciarán Hinds occupy a central role in the boy’s life. As sides become entrenched, the family is drawn into situations against its will, forcing difficult decisions in this is a moving love letter to a particular time and place.

Bríd Ní Neachtain stars as the recently widowed Róise, who believes that a stray dog embodies the spirit of her late husband Frank. Isolated since his death two years ago, the appearance of the dog shakes her out of herself. Ignoring her son’s and others’ protests, a rejuvenated Róise goes all out to indulge the dog’s love of hurling, steak, and a favourite chair, while starting to believe in reincarnation. This is a warm-hearted, witty and uplifting tale of finding hope in the darkest of places.