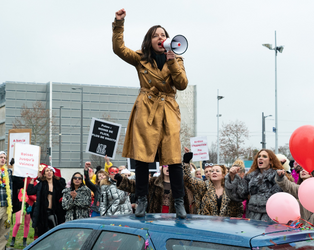 This week’s new titles at the Irish Film Institute from Friday, 26th August 2022 include Her Way and Official Competition. Read on for a selection of reviews or pop in to make up your own mind!

“Laure Calamy of Call My Agent! fame is mesmerising as a sex worker of a certain age in Cécile Ducrocq’s perceptive and humane feature debut.” 3/5 – The Guardian

“Calamy’s fiery performance as Marie is the engine which drives the film.” – Screendaily

“Laure Calamy excels as a principled sex worker forced to compromise her independence.” 4/5 – The Arts Desk

“French filmmaker Cécile Ducrocq is certainly off to a sensational start with her cracker of a debut Her Way. The film, which went on to nab a Best Actress nomination at the 2022 Cesar Awards for its lead actress Laure Calamy, has since been garnering rave reviews across the board in recognition of its captivating performances and heartfelt narrative.” 4/4 – Flickeringmyth

“There are films about sex workers in almost every genre, but few I can recall strike the same balance as Her Way. The film engages with many different circumstances within sex work.” – Heyuguys

“Everyone on screen is having a ball — albeit behind the straightest of faces — in this uproarious gallimaufry of movie-related pretentiousness. The absurdity is exquisitely detailed and mounted.” 5/5 – The Irish Times

“Directed by Gastón Duprat and Mariano Cohn, the film is a satirical look at the inner workings of the film industry, but as they say in the business, there is almost always some truth in every performance” 4/5 – Irish Examiner

“The committed interpretations of its brilliant cast elevate it to a sound comedy – a comedy that feels refreshing in its approach. Hollywood should take note” 4/5 – The Upcoming

“The film industry loves to mock itself, but this latest movie-making satire has a rare degree of nuance to it.” 4/5 – The Independent

“It’s irresistibly silly. Honestly, what’s not to love about a film that adds half a metre of height on to Penélope Cruz with a curly red wig possibly inspired by Sideshow Bob from The Simpsons? Cruz doesn’t play a psychopathic clown, but she’s the next best thing: a film director keen on power games, big glasses and long rehearsal periods.” 4/5 – Financial Times

“Banderas and Cruz are hilarious in this sophisticated satire.” 4/5 – The Times

“A beautiful, uproarious roasting of film-world vanity.” 5/5 – The Telegraph

“It is a hilarious yet striking examination of the filmmaking and acting process, as well as the entitlement of the rich and famous, leading to a shocking third act which is hard to foresee.” 4/5 – The Morning Star

“Penélope Cruz is luminous as Lola, the russet-haired, eccentric and brilliant arthouse film director with unusual (and probably illegal) methods of motivating her actors in the meta movie comedy Official Competition.” 5/5 – Inews

“Joyride is a treat and audiences will relate to every tender second, every element of whimsical synergy, and every symbiotic piece of intercommunication. It is just wonderful to watch.” – Film Ireland