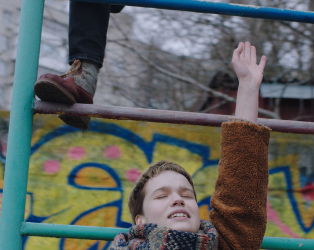 June 9th 2022: A Dublin-based Ukrainian creative collaborative is launching a Ukrainian Film Festival at the Irish Film Institute (IFI) on Saturday, July 2nd with an opening night gala. The festival, which runs July 2nd – 27th, offers Irish audiences the opportunity to enjoy the best of contemporary Ukrainian cinema. The film festival is part of Untold Ukraine, a series of art events organised in Dublin throughout the summer.

Explaining the motivation behind the project, Nastya Kharytonova, the coordinator of Untold Ukraine, said, ‘We wanted to raise awareness about Ukraine as a country and a nation through art and culture. We want to showcase the creativity and resilience of Ukrainian people in the face of this devastating war, but also share what we love about our country and what its rich culture has to offer.’

Commenting on bringing these Ukrainian films to the IFI, Cinema Programmer Kevin Coyne said, ‘We are delighted to present Irish audiences with the opportunity to enjoy this selection of contemporary films from a European national cinema with a proud and rich history in the medium.’

Following the dissolution of the USSR, Ukrainian cinema has forged a distinct identity, thanks to filmmakers such as Kateryna Gornostai and Valentyn Vasyanovych, and this short festival presents an opportunity to engage with Ukrainian culure, presenting new and recent documentary and drama.

Screening as part of the opening night gala on Saturday 2nd is Katernya Gornostai’s Stop-Zemlia, winner of the Crystal Bear at the 2021 Berlinale. An opening night gala will precede the screening of this drama centring on introverted high school girl Masha and the uncertainty of youth. This film will be introduced by Larysa Gerasko, the Ambassador of Ukraine to Ireland.

The moving documentary Mariupolis screens on Wednesday 6th, directed by the late Lithuanian filmmaker and academic Mantas Kvedaravicius. Mariupolis focuses on everyday life in the Ukrainian city that has been central to recent news stories about its siege, set during the initial targeting by separatists after the Russian annexation of Crimea and invasion of the Donbas in 2014. This screening will be introduced by Marijus Gudynas, the Lithuanian Ambassador to Ireland.

Screening on Wednesday 13th is The Living Fire, a 2015 documentary directed by Ostap Kostyuk about three Carpathian shepherds, who set off with their flock into the mountains on a lonely journey.

Closing the short festival is a screening of My Thoughts are Silent on Wednesday 27th. Winner of East of the West at the Karlovy Vary International Film Festival, the film tells the story of 22-year-old sound engineer Vadim who sets out to record the sound of a rare bird found only in the Transcarpathian mountains of Ukraine.

Tickets are on sale now; proceeds from ticket sales go to Nova Ukraine, a nonprofit organisation dedicated to providing humanitarian aid to the people of Ukraine. Tickets cost €11.50 for IFI Members, €13.00 for non-Members. Donations via the Untold Ukraine page are also open, to support the people of Ukraine and get custom-made souvenirs, all created for the festival.

Tickets are on sale now from www.ifi.ie/ukraine-untold/
Additional donations are being taken from www.opencollective.com/untold-ukraine-ie/projects/film-festival