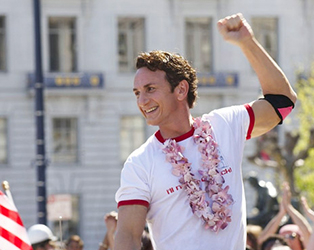 Selected for the IFI’s monthly Bigger Picture strand, Milk is a moving biopic of activity Harvey Milk, the first openly gay man elected to public office in the US, starring Sean Penn.

Speaking about selecting Milk for the IFI’s Bigger Picture, Mr. Leo Varadkar T.D. said, ‘Harvey Milk was the first openly gay man to be elected to public office. He did so by building a coalition for change that transcended LGBT rights. I have always been inspired by his life story, his leadership as well as his imperfections. I am conscious that he paid the ultimate price for his beliefs. His picture is on my office wall. I have met people who knew him and they all agree that Gus Van Sant and Dustin Lance Black’s film is faithful to his story and that Sean Penn’s portrayal of Milk is true to him.’

Tickets are on sale now from www.ifi.ie/film/the-bigger-picture-milk. Milk screens on Thursday, June 23rd at 18.15 at the Irish Film Institute, 6 Eustace Street, Temple Bar.