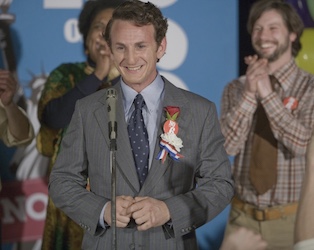 The screening will be introduced by the Tánaiste and Minister for Enterprise, Trade and Employment, Mr. Leo Varadkar T.D.

Selected for IFI Bigger Picture to tie in with Pride, Milk is director Gus Van Sant’s worthy biopic of activist Harvey Milk who became the first openly gay man elected to public office in the US.

Sean Penn shows again how he truly inhabits each character that he plays, and brings a detail and conviction to this depiction of the rise of disaffected hippie Milk to national symbol through his campaigning for equality. Dubbed the Mayor of Castro Street, we see how Milk, first spurned at local elections, went on to muster cross community support through his charismatic leadership, prepared to take on the bigotry present around him.

If the story may seem familiar and historic, it serves as a timely reminder of those who fought and campaigned, but also societal prejudices which remain, despite hard-won, recognised freedoms.