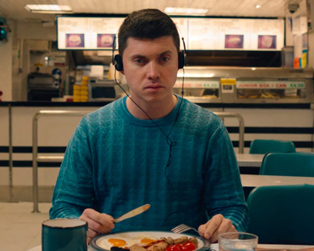 BEHIND THE SCENES WITH THE ‘WAVE’ TEAM

On Tuesday, August 28th, the IFI continues its focus on short-form cinema with Brief Encounters: New Irish Fiction. This programme includes some of the best narrative fiction made in recent years, with six short films in all.

In our latest mini interview, we catch up with team from Wave – director and actor TJ O’Grady-Peyton, director Benjamin Cleary, and producer Rebecca Bourke.

What was the genesis of this story and the driving force behind you realising it as a film?

TJ O’Grady-Peyton: Wave started off as a fun side project between myself and Ben in late 2015. We soon realised that it was turning into a mammoth production so luckily our producer Rebecca Bourke came on board. The idea of the story came about after Ben read an article about a man who hit his head and woke up speaking fluent Welsh despite not being from Wales. The film developed into somewhat of a modern day fairytale or a tale of morality. The driving force for me was the opportunity to work with a group of close friend on a passion project that had some depth and plenty of creative challenges.

In terms of your own directorial style, can you elaborate on how you worked with the actors in this film?

Benjamin Cleary: It was always going to be a challenge to pull off an entirely made up, predominately improvised language. On set we devised a system whereby TJ would speak the scene in English and then repeat the words in our made up language. I think this worked well to keep what he was saying consistent with the emotion behind the words. We also went with a lot of improvisation between the actors on set, especially between TJ and Danny, which they both pulled off excellently. Aside from that myself and TJ worked a lot in pre-production to build a rich interior life of the character so that by the time we started shooting we had a lot of stuff to work with.

Is there any advice you could give to young filmmakers or people who wish to embark on a career in filmmaking?

Rebecca Bourke: For young producers I would recommend getting experience in a production company under established producers. It’s good to start as a runner and work your way up the ranks so by the time you become a producer you will have so much experience, producing will be second nature to you. Make sure to always ask questions, if you’re unsure, don’t pretend you know, it could cost you.

For young directors, you should be continuously educating yourselves, watching as many films as you can and learning from the many talented directors that have gone before you. Study your craft, do research, form your own style and most importantly, take your time. There’s a lot of directors out there that rush to release their films. If you do that, you’re going to compromise the overall result. Don’t release until you’re 100% confident that the work you’re releasing is the best it can be. Finally, enter into competitions and festivals. It is good to get feedback from industry professionals, understand the areas you need to improve on or potentially have your work awarded and endorsed!