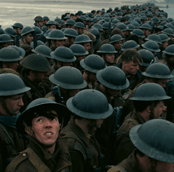 The Irish Film Institute (IFI) is proud to present Christopher Nolan’s epic action thriller, Dunkirk, in glorious 70mm, beginning Friday July 21st. Nolan, an advocate for the use of celluloid, chose to film Dunkirk on large format stock, and the IFI is showing the film in one of the director’s preferred formats.

Nolan directed Dunkirk from his original screenplay, utilising IMAX and 65mm film cameras to bring the story to the screen.

Dunkirk was produced by Christopher Nolan and Emma Thomas, with Jake Myers serving as executive producer.

Dunkirk opens in cinemas worldwide beginning July 21, and in special engagements in 70mm, 35mm and Imax film.  The film is released by Warner Bros. Pictures, a Warner Bros. Entertainment Company.

Previous 70mm screenings at the IFI have included Vertigo and 2001: A Space Odyssey, as well as recent sell-out screenings of Tim Burton’s Batman, Quentin Tarantino’s The Hateful Eight and Paul Thomas Anderson’s The Master.

Philip Kaufman’s Oscar-winning The Right Stuff will also screen in 70mm as part of our Dark Skies series on July 15th.

Dunkirk in 70mm will screen daily from Friday, July 21st.

A 70mm film is a cinema print in which each frame is 70mm wide, containing 65mm wide visual image, with the remaining 5mm containing the soundtrack strips. Optimal results, in terms of resolution and picture quality, are achieved when material is shot on 65mm stock and then printed onto 70mm. However, due to the cost of shooting on this format, many 70mm prints are so-called “blow-ups”, which originated on 35mm stock. This is not the case with the IFI’s presentation of Dunkirk.

Despite the remarkable audiovisual experience offered by 70mm films, which can still surpass the best of what digital cinema has to offer, there are a limited number of “true” 70mm films. Even within the prints available internationally there are a finite number which remain in a condition that best shows off the format.

However, as the only cinema in the country capable of showing films on 70mm, IFI holds regular screenings of the best of what is currently available, and we encourage anyone with an interest in film to experience it for themselves.