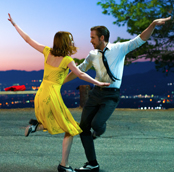 Movies at the IFI in January 2017 – LA LA LAND, MANCHESTER BY THE SEA, JACKIE

The year has turned and 2017 is upon us. That means twelve months of cinema-going stretch ahead, and your new favourite film might be just waiting to be discovered.

Today, we’re taking a look at some of the biggest releases on the way in January. As everyone knows, we’re deep into Awards season, and that means all the films you’ve been hearing about for months will be arriving at the IFI. Here are three must-see releases for the month.

LA LA LAND
Damien Chazelle hit the big time with his first film Whiplash in 2014 – based on his own experiences as a young man learning to become a drummer. The blistering debut went starred Miles Teller and went on to earn three Oscars including a well-deserved statuette for J.K. Simmons. Expectations are sky high for his follow up, La La Land.

You certainly can’t fault his ambition as the film is a full-scale musical romantic drama, with an incredible cast led by Ryan Gosling and Emma Stone.

The story is about a young woman called Mia (Stone) who wants to be an actress but is stuck working as a studio barista between failed auditions. Through a series of meet cutes, she crosses paths with Sebastian (Gosling) a jazz pianist who is also living a complicated life filled with disappointment. In the climes of a stylised Los Angeles, they connect though the power of song… but things won’t be quite so simple as happily ever after for this couple.

Chazelle actually wrote La La Land before Whiplash as an aspirational exercise, sure that he’d never be able to bring it to life. After scrapping a previous version when the budget was too low, he moved on to the smaller scale Whiplash which became a critical and commercial success. La La Land was reborn, and he managed to secure a $30 million budget for the film, 10 times more than that of Whiplash.

The project was originally set to star Whiplash’s Miles Teller opposite Emma Watson but the two stars couldn’t commit, leading to moving up the ages of the leads and securing arguably more interesting replacements in the form of Gosling and Stone.

They’re joined on screen by a returning J.K. Simmons, singer John Legend, Rosemarie DeWitt and another familiar name in Justin Hurwitz. He provided the pulsating score for Whiplash and has an even bigger job here constructing an entirely new series of catchy tunes.

La La Land is a spectacular musical from one of the most exciting directors around, and it simply has to be seen on the big screen.

Screening at the IFI from January 13th 2017. Book tickets here.

JACKIE
Oscar winner Natalie Portman stars as Jackie Kennedy in this acclaimed biopic which examines the life of one of the most famous people in the world before and after the tragic assassination of JFK in 1963.

Jacqueline Lee Kennedy was just 34 years old on the 22nd of November 1963 when a shot rang out in Dallas, Texas and President John F. Kennedy was killed. She became the public symbol of the global grief at his loss, and withdrew from the world in the wake of the funeral.

The new film from Chilean director Pablo Larraín moves around in a mesmerising way through the life of Jackie Kennedy, including events during her time at the White House. The central thread comes from the famous 1963 interview with Life magazine’s Theodore H. White – ‘For President Kennedy: An Epilogue which was published just days after the events in Dallas.

Jackie has had a long road to the big screen, with Darren Aronofsky and then partner Rachel Weisz originally attached as director and star all the way back in 2010. That fell apart after their split and Steven Spielberg almost came on board before the production started courting Natalia Portman for the lead role.

There was even the possibility of it becoming a HBO mini-series until Larraín was finally confirmed and shooting took place in early 2016 with a cast also including Peter Sarsgard as Robert Kennedy, Greta Gerwig, John Hurt, Richard E. Grant and Billy Crudup as journalist Theodore H. White.

Portman is already receiving some of the best notices of her career for the film, with a win at the Critic’s Choice Awards in late 2016, and she’s guaranteed to get a lot more awards attention this year.

Screening at the IFI from the 20th of January 2017. Book tickets here.

MANCHESTER BY THE SEA
Filmmaker Kenneth Lonergan is back after his award winning movie Margaret – which was made in 2005 and only saw a release in 2011 due to legal issues behind the scenes. Thankfully his follow up has been blessed with better luck.

Lonergan’s work in the past has been on the scripts for films like Analyse This and Gangs of New York. For his third directorial project he’s taken on a modern drama about a man called Lee (Casey Affleck) who is a janitor trying to live a quiet life. That all changes in the wake of the tragic passing of his brother, and the son he leaves behind.

The film was originally set up as a directing project for actor Matt Damon but Lonergan later took over with the plan being for Damon to star. That central casting fell apart, though Damon remains on board as producer. Casey Affleck now leads the cast and the word is that he gives the performance of his life as a man who would like nothing better than to retreat from life.

Michelle Williams is also in the cast and she has been receiving strong notices going into awards season. Kyle Chandler, Gretchen Mol and veteran player Matthew Broderick round out the supporting roles.

Despite a modest budget, Manchester by the Sea has already been doing well at the box office on release in the United States and arrives with awards from the American Film Institute, Critics Choice, and the National Board of review, as well as five Golden Globe nominations including nods for Affleck, Williams and Lonergan in his dual roles as writer and director.

Screening at the IFI from the 13th of January 2017. Book tickets here.