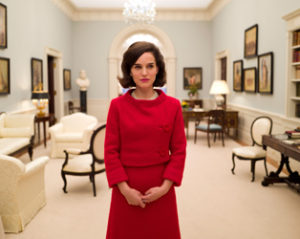 This film was released on Friday 20th  January 2017 and is no longer screening.

In depicting the trauma of JFK’s assassination as experienced by his wife Jackie (Natalie Portman), director Pablo Larraín (The Club, No) eschews the conventions of the biopic, choosing instead to focus on the immediate aftermath of the shooting, with brief flashbacks to the days before the event. Larraín shuffles the timelines of a number of key confrontations between the grieving First Lady and White House staff whilst providing a loose framing device in the shape of the interview for Life Magazine conducted by Theodore H White (Billy Crudup) in Hyannis Port a mere week afterwards.

Anchored by an extraordinarily three-dimensional performance from Natalie Portman and graced by Mica Levi’s innovative score that is by turns disorientating and delicate, Larraín’s Jackie is a fractured mosaic of grief, shock and confusion.