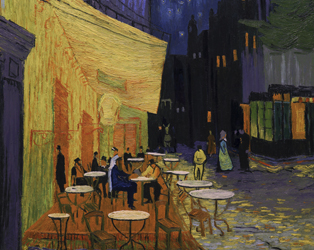 2017 Favourites Return – Including Loving Vincent, Meetings with Ivor and More!

As 2017 comes to a close and we’re celebrating 12 months of cinema with the return of some of our favourite movies of the year, back for Christmas and into January.

The list includes Loving Vincent, Kedi, The Farthest and Meetings with Ivor – films which really connected with audiences during 2017. Tickets are available now!

LOVING VINCENT
First released in October, Loving Vincent was a huge hit with audiences, telling the story of the final days in the life of Vincent Van Gogh. The unique style of the film was created through the combination of thousands of oil paintings, the first film ever made this way and it looks like a sure bet for a nomination in the Best Animated Film category at the Oscars. Real actors including Irish starts Saoirse Ronan, Aidan Turner and Chris O’Dowd were recorded and then their frames were animated over for a totally unique viewing experience.

KEDI
Back after a run which started in June, this documentary by Ceyda Torun dives into the streets of modern day Istanbul to give us a whole new perspective on the city. A cat’s eye view! Torun introduces us to a charming feline cast who give extra life to the streets – looked after by all and owned by no one in particular. With fleet-footed camerawork and soaring drone shots, Kedi a gorgeous documentary for cat lovers and everyone else too!

THE FARTHEST
From Irish filmmaker Emer Reynolds, this celebrated documentary gives uncommon insight into the work of the Voyager probes, now the most distant things from Earth which we have ever created, and likely to outlast the human race. It’s an inspiring piece of work, with far-reaching ideas and intimate interviews with the team of scientists who made the program possible.

MEETINGS WITH IVOR
First showing at the IFI in January 2017 with the title The Wonder Eye, this documentary portrait of Professor Ivor Browne went on to an amazingly long run and became one of our most talked about films of the year. Through conversations with the likes of Tommy Tiernan, Mary Coughlan, Tom Murphy, Nell McCafferty and more, we learn more about the man behind the movement, and the extraordinary mind which has helped so many people.

Thanks to everyone who supported these films and the Irish Film Institute in 2017, and we hope to introduce you to your new favourite film in 2018!