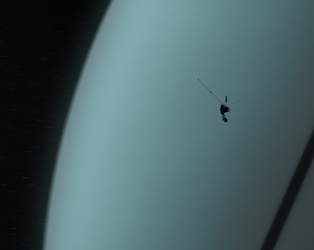 This film was released on Friday 28th July 2017 and is no longer screening.

Emer Reynolds’s enthralling documentary details NASA’s ambitious Voyager program which, in 1977, launched two probes whose original mission was to study the outermost planets of the Solar System, but went on to become the first human-created object to enter interstellar space.

Members of the program’s scientific team recount anecdotes of the ‘golden record’ affixed to each craft containing information about our planet for the benefit of any civilisation that might encounter the probe, and the taking of the famous photograph that presents the Earth as a ‘pale blue dot’.

This is a genuinely inspiring and uplifting documentary, and a tribute to the ingenuity and curiosity which created a craft with less computing power than a modern smartphone which is now 21 billion km from the Earth, and may outlast the planet itself as it continues to explore the universe.