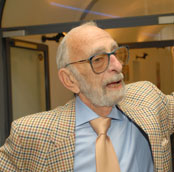 It was with great sadness that we learnt of the death of David Kelly, one of Ireland’s best loved, most delightful characters – both on and off the screen.  To international audiences he embodied a quintessential Irish rogue – a humorous, work-shy scoundrel. To Irish audiences he was admired more perhaps for his fine acting talent –as he demonstrated as Rashers Tierney in Strumpet City –than for his fine physique – which he showed off with great glee in Waking Ned. And it was a great joy to watch new audiences experience his warmth and wit as the grandfather in Charlie and the Chocolate Factory. He was a great friend of the Irish Film Institute and joined us frequently for screenings and discussions about his work (here in Dublin and once,  with his great friend Milo O’ Shea for a premiere screening of Mystics  at the bluesy Chicago Irish Film Festival).  He would no doubt have joined us for our forthcoming screening of Quackser Fortune  on March 17th and regaled us with colourful tales of this rather bizarre film.

Sadly, he won’t  tread our boards again – but his spirit lives on through his friends and family and through his wonderful film legacy.

He will be greatly missed.