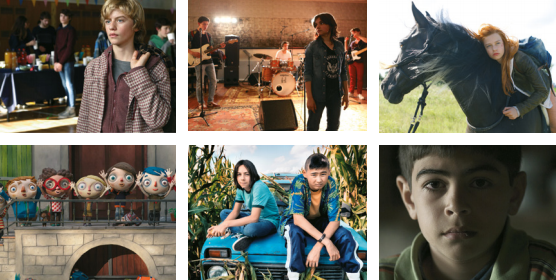 The YAA is the Young Audience Award of the European Film Academy. In May, 2018 IFI will host these awards. The panel is for those aged 12-14 and will come together regularly to watch and discuss different kinds of films from all over Europe. You can join the conversation by contacting Dee at dquinlan@ifi.ie.

Read on for a selection of reviews from our panellists this year.

MOROSHKA
I thought that Moroshka was a brilliant film, I feel empathy with the main character because I love animals. I understood three messages form the short film, one that animals should be are equals. Two that though we might not see thing at first it is never too late to see them, three that even when we don’t want to sometimes we have to let go. Personally I think that this film suitable for younger kids because it inspires them to look after themselves and other by caring, loving and sharing with them.

I thought the animation was beautiful and loved by younger kids. The hand drawn pictures were admired by all eyes and the storyline was spectacular. My favourite part was at the end when the little girl and the wolf shared pancakes under the watchful eyes of the moon and stars. When they parted everybody in the felt a wave of sadness wash over them. Thank you for letting me watch these amazing short films!
Giulia , age 12

MOROSHKA
This film is a beautiful story about a young Russian girl who befriends a wild wolf, takes it into her care and watches it develop.

The maker used quite a bit of humour in the middle of the film.  The funniest part was where the wolf tries to eat some sheep. The sheer degree that of repetition made it funny.  The sheep’s faces were funny but the interaction with the wolf was what made it really funny. It was also funny where the man tried to shoot the wolf and the gun blew up in his face.  The hunters could have had a bigger role.  They were not much of a threat, more an attempt at comedy and it would have been better if they had been scarier.

It was sad near the end when the wolf left the girl.  It was happy as well because the wolf was going back to where he belonged.

It was an animated film.  The art work was stunning.  The scenery was simple but still gave a lot of depth to the film.  It also conveyed the cold of Russia

The story line was very well conveyed despite lacking words.  It gave an excellent message: everybody can be a friend, if you treat them nicely.  We would recommend this film for all ages but especially for ages 5-8.
Daniel and Michael, age 11