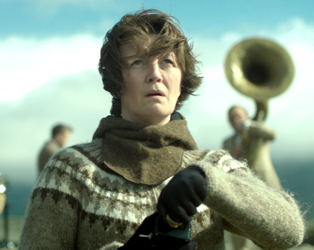 Halla (Halldóra Geirharðsdóttir) is, to her friends and neighbours, a respectable, middle-aged music teacher who practices Tai Chi and lives alone in a cosy apartment decorated with posters of Nelson Mandela and Gandhi. Nobody would suspect that this pillar of the community is living a double life as an eco-terrorist, hell bent on bringing down the industrial infrastructure she feels is wrecking Iceland’s economy and blighting its spectacular landscape. She is, however, forced to rethink her covert campaign of disruption when her long-cherished dream of adopting a child seems to be becoming a reality.

Anchored by a committed central performance – Geirharðsdóttir also plays Halla’s identical sister, Asa – Benedikt Erlingsson’s follow up to Of Horses and Men is a disarming delight that tackles pressing global concerns with a wry streak of postmodernist mischief.