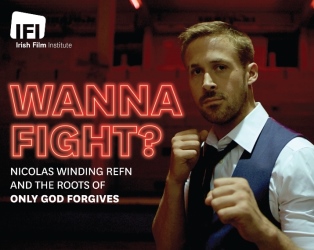 From August 3rd to 31st, the IFI presents: Wanna Fight?, a specially curated season of films to accompany the August 2nd release of the controversial and brutal new film by Nicolas Winding Refn Only God Forgives. To celebrate this exciting season, we’re delighted to offer one lucky person (plus their guest!) a chance to win a Season Pass to see all films included in our selection!

The IFI’s Wanna Fight? season is a selection of Winding Refn’s key influences and references, some directly acknowledged and some suggested. Winding Refn has been keen to invoke the names of other filmmakers in his work. Alejandro Jodorowsky’s name appears on the credits to both Drive and Only God Forgives, the genius filmmaker is represented here by the bizarre, beautiful and brilliant Santa Sangre. Also explicitly referenced by Winding Refn in relation to Only God Forgives is Gaspar Noé, a fellow provocateur, whose Enter the Void proved one of the most divisive of films released at the IFI in 2009. Winding Refn has namechecked Richard Kern, a key member of the 1980s NYC Cinema of Transgression Movement, and a selection of his short works characterised by extreme eroticism and disturbing violence are included in the season.

Wanna Fight? season runs from August 2nd to 31st – full details of all the films in the season are available at http://www.ifi.ie/wanna-fight/.

WIN a Season Pass for two and see all films, included in the Wanna Fight? Season – simply answer the question below before midday on Friday, August 2nd!

Ryan Gosling and Nicolas Winding Refn have made one film together before – which one?

Competition closes on midday, Friday August 2nd 2013. The winners will be contacted by email shortly after. (See IFI Terms and Conditions regarding prizes and competitions.)