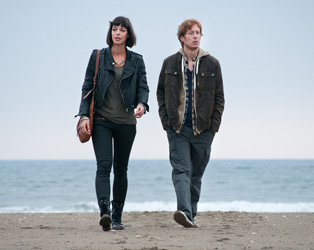 Celebrating the release of Love Eternal directed by Brendan Muldowney, opening July 4th at the IFI, we have a pair of tickets to give away to three lucky winners! The tickets are for a preview of the film + Q&A session with the director and actor Pollyanna McIntoshon Thursday, July 3rd, at 20.30.

Winner of the Best Irish Feature Award at this year’s JDIFF, this dark, tender romance introduces us to Ian (Robert de Hoog), an isolated young man intent on taking his own life. Chance encounters however, send him on a different path and he begins to experience the world first through interactions with the dead and later through an uneasy friendship with the alive but anguished Naomi (Pollyanna McIntosh).

Director Brendan Muldowney creates an exciting fusion of styles, using absurdist black comedy and gothic horror elements in tandem with probing character study. Adapted from Kei Oishi’s novel In Love with the Dead, Love Eternal is a beguiling fairy-tale about people rediscovering their zest for life.

What is the name of Brendan Muldowney’s debut feature film?

Competition closes at 5.00 pm on Wednesday, July 2nd, 2014. The winner will be contacted by email. (See IFI Terms and Conditions regarding prizes and competitions.)