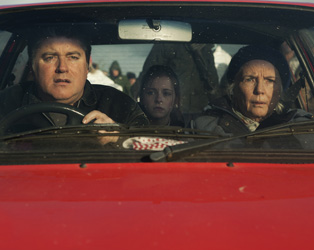 Join us for a special screening of LIFE’S A BREEZE with Guests this Saturday!

Long-anticipated Life’s A Breeze is opening this week at the IFI and we’re delighted to offer five pairs of tickets to a special screening of the film, followed by a post-screening Q&A with director Lance Daly and cast member Kelly Thornton, and hosted by IFI’s Programming Director Michael Hayden, on Saturday, July 20th at 16.10!

Director Lance Daly (Kisses) returns to Dublin for Life’s a Breeze, a warm and engaging comedy about a family making its way in post-Celtic Tiger Ireland. Matriarch Nan (Fionnula Flanagan) is upset when her unemployed layabout son Colm (Pat Shortt), with the aid of niece Emma (a fine performance from newcomer Kelly Thornton), organises a complete spring clean of the house the two share. Unfortunately, one of the items discarded is her old mattress, which housed her life savings, totalling close to a million euro. When Colm launches a public appeal to track the mattress down, it sparks a frenzy of dump-hunting that may lose the fortune permanently.

The film’s focus is on relationships between mother and son, and between grandmother and granddaughter, but beneath the gentle humour may be discerned some strong elements of satire on the current state of Irish society.

WIN one of five pairs of tickets to the screening, followed by a public interview with Lance Daly and Kelly Thornton on Saturday, July 20th at 16.10! Answer a simple question and enter your details below:

Life’s A Breeze stars one of Ireland’s favourite actors and entertainers. Which one?

Competition closes on midnight Thursday, July 18th 2013. The winners will be contacted by email shortly after. (See IFI Terms and Conditions regarding prizes and competitions.)