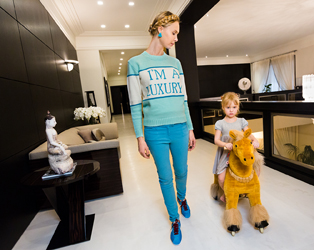 WIN A SIGNED COPY OF THE BOOK WHICH INSPIRED GENERATION WEALTH

To celebrate the release of Generation Wealth on July 20th, and our preview on July 17th followed by an exclusive recorded Q&A with director Lauren Greenfield hosted by journalist Kate Muir (tickets), we’ve got a very special prize to give away.

Lauren Greenfield’s (The Queen of Versailles) postcard from the edge of the American Empire captures a portrait of a materialistic, image-obsessed culture. Simultaneously personal journey and historical essay, the film bears witness to the global boom–bust economy, the corrupted American Dream, and the human costs of late stage capitalism, narcissism, and greed.

To celebrate the release of the new film, we’re giving away a copy of the book Generation Wealth, signed by the author Lauren Greenfield, who also directed the documentary.

The book is both a retrospective and an investigation into the subject of wealth over the last twenty-five years. Greenfield has travelled the world – from Los Angeles to Moscow, Dubai to China – bearing witness to the global boom-and-bust economy and documenting its complicated consequences. Provoking serious reflection, this book is not about the rich, but about the desire to be wealthy, at any cost.

To enter the competition, simply fill in the form below. Terms and conditions apply. This competition is open to residents of the Republic of Ireland and closes on the 25th of July 2017.

Q. What is the name of the author of the book Generation Wealth?