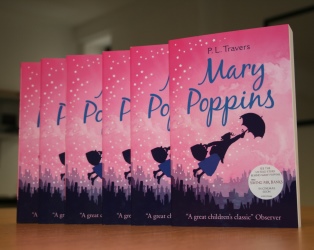 Win a copy of the children’s classic book ‘Mary Poppins’ by P.L. Travers

Disney studios made Mary Poppins in 1964, and it remains a perennial family favourite, with iconic performances from a cast including Julie Andrews and Dick Van Dyke, and the unforgettable songs of the Sherman Brothers. Walt Disney had tried to make the film as early as 1938, but P.L. Travers, the writer of the books on which the film is based, refused to give up the rights. Saving Mr. Banks imagines Disney’s negotiations with Mrs. Travers in run up the film’s production.

To celebrate the release of Saving Mr. Banks, the untold story behind Mary Poppins, we have copies of P.L. Travers’ book to give away – an enchanting read for adults and children alike. To win a copy, just answer the question below before midday on Friday, December 6th 2013.

Saving Mr. Banks is now showing at the IFI.

Also, if you’re in need of a spoonful of sugar, or you’re simply feeling Supercalifragilisticexpialidocious, we will have screenings of Mary Poppins on December 8th and 9th.

To win a copy, just answer the question below before midday on Monday, December 2nd 2013.

Who played the role of Mary Poppins in the 1964 film?

Competition closes at midday on Friday, December 6th 2013. The winners will be contacted by email shortly after. (See IFI Terms and Conditions regarding prizes and competitions.)