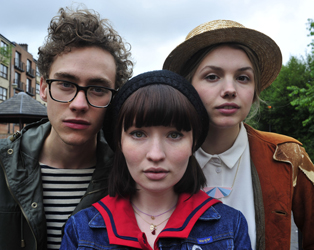 WIN TICKETS TO THE PREVIEW OF GOD HELP THE GIRL!

Celebrating the preview of Stuart Murdoch’s God Help the Girl on Saturday, August 16th at the IFI, followed by a satellite stream of Belle and Sebastian performing at the Corn Exchange, Edinburgh, we have two pairs of tickets to give away to two lucky winners!

The directorial debut of Stuart Murdoch is as sincere, courageous and loveable as the music he makes with Belle and Sebastian. With its attractive cast kitted out in jaunty berets, Breton shirts, vintage frocks and hairslides, God Help the Girl emerges as a delicious pop musical, a refreshingly uncynical celebration of youth and dreamers. Only the most jaded will deny a place in their hearts for its numerous delights, the fabulous soundtrack being the first of them.

In what city were Belle and Sebastian formed?

Competition closes at midnight, Thursday, August 14th, 2014. The winners will be contacted by email shortly after. (See IFI Terms and Conditions regarding prizes and competitions.)