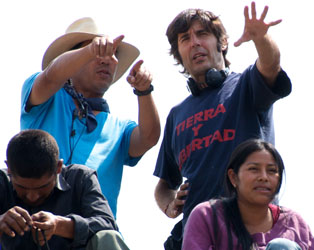 Celebrating the release of the film The Golden Dream EXCLUSIVELY at the IFI, we have two pairs of tickets to give away to the preview of the film on June 26th + Q&A session with the director Diego Quemada-Díez!

A group of Guatemalan teenagers attempt to make their way to the U.S.A., dreaming of the better life that the country promises, but they are ill equipped, both physically and emotionally, for the challenges they face getting there… Diego Quemada-Díez has previously worked with Ken Loach, and there’s evidence of that in the film’s raw realism and its committed social concerns. It’s a brilliant and effecting debut, which has won numerous prizes on the festival circuit, including an award for its young ensemble cast at Cannes 2013.

This film opens EXCLUSIVELY at the IFI on Friday, June 27th, with this special preview on Thursday, June 26th (tickets for 26th on sale now). Tickets for screenings from 27th will go on sale on Monday, June 23rd.

To be in with a chance to win a pair of tickets, simply enter your name and email address below!

Competition closes at 5pm, Friday June 20th, 2014. The winners will be contacted by email. (See IFI Terms and Conditions regarding prizes and competitions.)