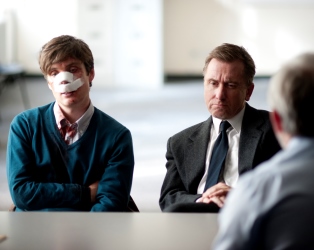 Win tickets to see Broken + a signed copy of the novel!

In collaboration with the British Council on the occasion of ‘Words On The Street: Literature Night’ (May 15th), the IFI is delighted to welcome author Daniel Clay to introduce a screening of Rufus Norris’ acclaimed adaptation of his novel, Broken on Tuesday, May 14th at 6.30pm. Clay will take part in a post-screening Q&A session on his work.

About the film
When a neighbour’s daughter accuses Skunk’s friend Rick, a young man with learning difficulties, of rape, a chain of events is set in motion that sees the young girl dealing with the repercussions of violence, first love, strained familial relationships, and personal danger. The film stars Tim Roth, Cillian Murphy and Eloise Laurence.

To celebrate Daniel Clay’s visit to the IFI for this one-time-only screening of Broken, we’re delighted to give away one pair of tickets to the film on May 14th and a signed copy of Clay’s novel!

Simply answer the question below before midnight, Sunday May 12th 2013. Good luck!

Which Irish actor stars in the film Broken?

Competition closes at 12am midnight on Sunday, May 12th 2013. The winner will be contacted by email. (See IFI Terms and Conditions regarding prizes and competitions.)