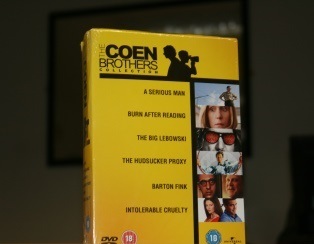 Inside Llewyn Davis is the latest work from the Coen brothers. Set in Greenwich Village of 1961, Llewyn Davis is a struggling musician relying on the kindness of others during a New York winter, who sleeps on couches and plays irregular gigs when he can persuade bar owners he won’t offend the paying customers. Penniless and embittered, he trudges the streets with a guitar strapped to his back as he begins to think he’d be better off joining the Merchant Navy than pursuing his dreams of greatness. The latest film from the Coen brothers evocatively depicts New York’s folk scene before Dylan went electric with affection, insight and wit.

Inside Llewyn Davis opens at the IFI on January 24th, while a special preview screening will take place on January 22nd (20.00) in association with Digital Biscuit.

To celebrate the release of the Coen brothers’ latest film, we have a box-set of some of their most revered work, containing six titles including A Serious Man, Barton Fink and The Big Lebowski. To win this prize, simply answer the following question before midday this Friday, January 24th.

Q. Which of the following Coen brothers films won Best Picture at the 2008 Oscars?

Competition closes at midday on Friday, January 24th 2014. The winner will be contacted by email shortly after. (See IFI Terms and Conditions regarding prizes and competitions.)