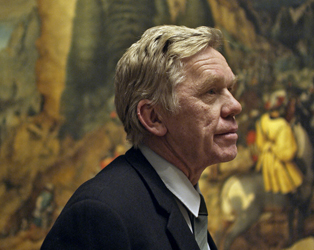 In a career spanning three decades, New York based filmmaker Jem Cohen has made dozens of films in various formats, building a strikingly original body of work that reflects the spirit of independent filmmaking in its original sense. These sometimes dreamily impressionistic, sometimes arrestingly gritty films defy conventional categorisation, and shift easily between narrative and documentary modes.

His latest film, Museum Hours a feature-length narrative tale largely shot in Vienna’s magnificent Kunsthistorisches Art Museum, marks another career highpoint and will also be screened as part of the festival.  (Saturday, February 23d at 17.00 at the IFI.)

A programme of his work including short films and Museum Hours will take place at the IFI on February 23rd and 24th as part of an IFI and JDIFF collaboration.

To win a FREE pair of tickets to Museum Hours (followed by a Skype Q&A with Cohen), simply answer the question below before 12 midday on Friday, February 15th!

In which art museum is Museum Hours mostly shot?

Competition closes at midday, Friday February 15th 2013. The winners will be notified by email shortly after. Tickets are non-transferable and no cash alternative will be offered as the prize.