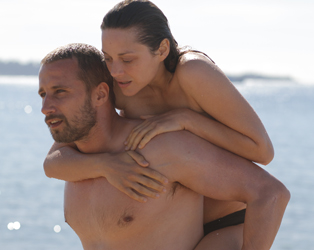 Ever-enterprising French writer-director Jacques Audiard follows his brilliant crime picture A Prophet with his rather particular take on a modern love story, handled in characteristically abrasive and original fashion. Marion Cotillard plays a biologist who loses both legs in a freak accident at a waterpark tourist attraction, and unlikely salvation arrives in the form of Matthias Schoenaerts, a part-time bouncer and reluctant single parent who sees a money-making opportunity in the bare-knuckle boxing game.

To celebrate Rust and Bone screening at the IFI until November 22nd, we are exhibiting 8 visuals in our foyer (see image below!) and will give one of these, plus Craig Davidson’s collection of short stories (on which the film is based) to 8 lucky winners!

Simply answer the question below before midnight, Monday, November 12th 2012. Prize courtesy of Studiocanal. Competition closes at midnight, Monday November 12th 2012. The 8 winners will be chosen at random from the correct answers on November 13th and notified soon after. Please note that winners cannot choose which visual they receive.

Rust and Bone runs at the IFI until November 22nd. Watch the trailer: