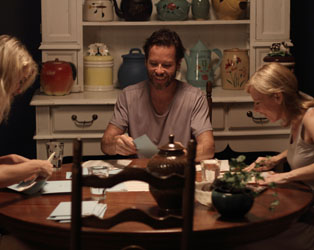 Win DVDs and tickets to see Breathe In at the IFI!

He’s married with a wife and a teenage daughter, but is Guy Pearce’s high-school music teacher settling for less than he wanted? The smiles in a family photo don’t betray his unease, but undercurrents of frustrated ambition in his life come to the surface when the upstate New York household hosts an English exchange student (Felicity Jones), a fascinating young lady with creative issues of her own, in Drake Doremus’ Breathe In.

Breathe In runs at the IFI until August 1st. BOOK NOW.

To celebrate the release of this beautifully-rendered chamber drama at the IFI, we’re giving away a fantastic prize! Answer the question below before midnight, Monday July 22nd and you could win a DVD bundle (Mia Hansen-Løve’s Goodbye First Love and McCullin, the acclaimed documentary about the famous photojournalist Don McCullin), a pair of tickets to any screening of Breathe In at the IFI and the official film poster! Not bad…

Question: Which of these films has Guy Pearce NOT appeared in?

Prize courtesy of Artificial Eye. Competition closes on midnight Monday, July 22nd 2013. The winners will be contacted by email shortly after. (See IFI Terms and Conditions regarding prizes and competitions.)