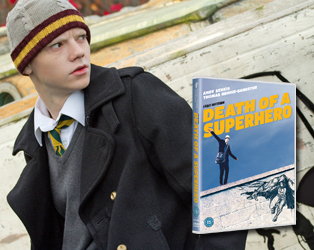 Win Death of a Superhero on DVD!

Donald works through his feelings on his prognosis in sessions with therapist Dr. King (Andy Serkis) and in comic book-style drawings in which he is an invincible superhero fighting his mortal enemy. Despite his illness, Donald has the usual concerns of a teenage boy – sex, primarily. With the arrival of quirky new classmate Shelly (Aisling Loftus), this becomes secondary to the romance blossoming between them, and the problems attendant on first love.

Death of a Superhero is available to buy now on DVD in the IFI Film Shop and we have 3 copies to give away in our competition! Simply answer the question below and submit your details before midnight on Monday, April 22nd. Good  luck!

Thomas Brodie-Sangster first came to prominence on the big screen as Sam in Love Actually. Who played his step-dad, Daniel?

Prize courtesy of Element Pictures. Competition closes at 12am (midnight) on Monday, April 22nd 2013. The winners will be contacted by email the following day.  (See IFI Terms and Conditions regarding prizes and competitions.)