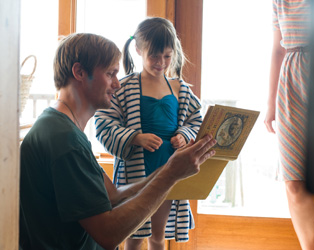 Six-year-old Maisie (Onata Aprile) bears silent, initially uncomprehending witness to the collapse of her parents’ marriage in What Maisie Knew. Subsequently, father Beale (Steve Coogan) marries nanny Margo (Joanna Vanderham), while mother Susanna (Julianne Moore) spontaneously weds Lincoln (Alexander Skarsgård). What becomes increasingly clear to Maisie is that her parents are less interested in her welfare than in using her to score petty victories over each other, their selfishness usually resulting in her being left with their new partners, who have true and deep affection for the child. Told from Maisie’s perspective, it is a heartrending film.

What Maisie Knew is currently running at the IFI. BOOK NOW.

To celebrate the release of What Maisie Knew, we have a prize bundle to give away which includes the novel, What Maisie Knew, by Henry James; a poster for the film; and a bundle of novels that have also been adapted for screen, including The Hunter and Wuthering Heights! To be in with a chance of winning this fantastic prize, simply answer the question below before midday on Monday August 26th 2013, and the winner will be announced shortly after.

Competition closes on midday Monday, August 26th 2013. The winners will be contacted by email shortly after. (See IFI Terms and Conditions regarding prizes and competitions.)