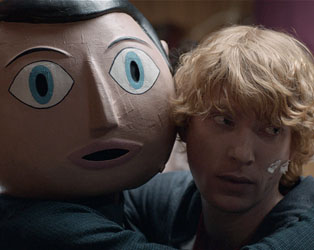 Win tickets to Frank + Director Q&A at the IFI!

To celebrate the opening of Frank, starring Michael Fassbender and Domhnall Gleeson, we’re giving away 5 pairs of tickets to the opening night screening followed by a Q&A with director Lenny Abrahamson! The event will take place at 6.30pm this Friday, May 9th.

Jon (Domhnall Gleeson) fancies himself as a musician, though his pitiful efforts at song writing don’t suggest a stadium tour is on the cards for him anytime soon, his limited talent unlikely to provide an escape from the day job and suburban drudgery. Yet, in a twist of fate that sets the tone for a bizarre adventure, Jon is given a gig playing keyboards for an eccentric band with an unpronounceable name, making peculiar, improvised music under the direction of leader Frank (Michael Fassbender), an enigmatic savant who wears a giant fake head…

Competition closes 12 midday on Thursday, May 8th 2014. The winners will be contacted by email shortly afterwards.  (See IFI Terms and Conditions regarding prizes and competitions.)