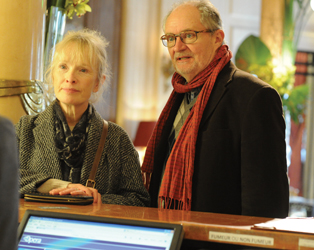 In Le Week-End, Meg (Lindsay Duncan) and Nick (Jim Broadbent) have escaped Birmingham set on celebrating their 30th wedding anniversary in Paris. She’s a teacher who is thrilled to be freed from the shackles of their mundane grind, while he’s a grouchy, cynical university lecturer with reasons to resent spending money. Their trip to the City of Light serves to illuminate tensions between the couple, with spats and squabbles interrupting the battered affection they show each other. Constantly questioning how their relationship has come to this, things get worse when they bump into an unbearable, successful old friend Morgan (Jeff Goldblum), a man living the life Nick could have had.

Le Week-End runs at the IFI from October 11th.

To celebrate the release of this charming and brutally honest romantic comedy, we have a prize bundle to give away courtesy of Curzon Film World, including a DVD bundle and an alternative French artwork poster for Le Week-End. To be in with a chance of winning, just answer the question below before midday, this Friday 11th October, and the winner will be announced shortly after.

Q. Which one of the following films is also set in Paris?

Competition closes at midday Friday, October 11th 2013. The winners will be contacted by email shortly after. (See IFI Terms and Conditions regarding prizes and competitions.)