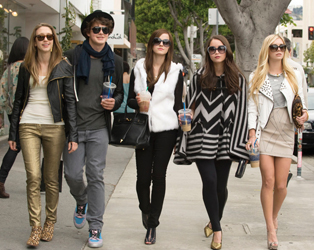 Win a poster signed by Sofia Coppola, DVDs and The Bling Ring book!

Based on a Vanity Fair article that detailed the exploits of a group of capricious teenage girls in Los Angeles who tracked and then burgled trashy tabloid stars including Paris Hilton and Lindsay Lohan, Sofia Coppola has created an incredibly stylish and relevant portrayal of the hollowness of celebrity culture in The Bling Ring, starring a standout Emma Watson, Leslie Mann, and Taissa Farmiga. Book now.

The Bling Ring opens at the IFI this Friday, July 5th and, boy, have we got a fabulous prize up for grabs to celebrate! Simply answer the question below before midnight on Friday, July 5th and you could win an official poster for The Bling Ring signed by Sofia Coppola, the book that inspired the film (written by Vanity Fair‘s Nancy Jo Sales) and a DVD bundle of Coco Before Chanel, Diana Vreeland: The Eye has to Travel  and The Tourist!

Prize courtesy of Studio Canal. Competition closes at 12am midnight on Friday, July 5th 2013. The winner will be contacted by email. (See IFI Terms and Conditions regarding prizes and competitions.)