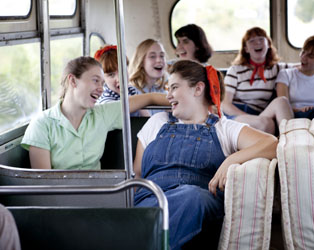 Win a pair of tickets to Foxfire!

Foxfire marks a couple of firsts for the acclaimed French director Laurent Cantet, whose previous feature The Class won the Palme d’Or at Cannes and an Oscar nomination. It concerns a group of young women growing up in small-town America during the 1950s. Confronted with a patriarchal environment where men and boys are either predatory or condescending figures, the teenagers rebel, forming a fiercely protective all-female clique. Skilfully smuggling socio-political concerns within a thrilling drama, Foxfire features outstanding, natural performances from a cast of non-actors.

Foxfire runs at the IFI from August 9th-15th. BOOK NOW.

To celebrate the release of Foxfire and Laurent Cantet’s first entirely English language film, we have two pairs of tickets and two film posters to give away. The tickets are valid for any screening of Foxfire at the IFI. To win a pair of tickets and a poster, simply answer the question below before midday this Monday August 12th, and the winners will be announced shortly after.

Which of these films is not a Laurent Cantet film?

Competition closes on midday Monday, August 12th 2013. The winners will be contacted by email shortly after. (See IFI Terms and Conditions regarding prizes and competitions.)