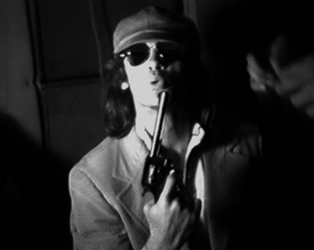 Win a pair of tickets for the opening night of Very Extremely Dangerous!

Following on from Barbaric Genius, Paul Duane’s new documentary, Very Extremely Dangerous, takes us deep into the shambolic world of Jerry McGill, an aging rocker and one-time minor film star who spurned a rock’n’roll career for a life of crime, robbing banks and running from the FBI. When, after three jail sentences, aged 70 and suffering from terminal cancer, McGill announced his return to the business, Duane headed impetuously for Memphis on his trail. Darkly compelling with a fresh, off-kilter energy, the film demonstrates that love, friendship and art can play a role even within the most toxic, self-destructive lives.

To celebrate the release of Very Extremely Dangerous, we have two pairs of tickets to give away for the opening night of the film this Friday, 18th October. To win a pair of tickets, simply answer the question below before midday, Thursday 17th October, and the winners will be announced shortly after.

Competition closes at midday Thursday, October 17th 2013. The winners will be contacted by email shortly after. (See IFI Terms and Conditions regarding prizes and competitions.)