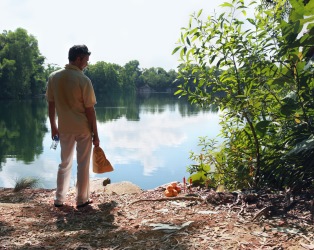 Director duo Joe Lawlor and Christine Molloy, otherwise known as the Desperate Optimists, return with their second feature Mister John. Gerry (Aidan Gillen) travels to Singapore where his estranged brother, a bar owner who has possibly been involved in nefarious activities, has died in a drowning accident. It emerges that Gerry is running away from his own problems at home, and, as he becomes more immersed in a foreign culture and environment, taking on his brother’s mantle becomes appealing to him. The trouble is he is not exactly a suitable substitute for the dead man.

To celebrate the release of Mister John, we have a great prize bundle to give away, including the official poster for Mister John, a DVD bundle courtesy of Artificial Eye/Curzon and a pair of tickets to any screening of the film at the IFI. Simply answer the following question by midday on Monday, 30th September 2013.

Mister John runs at the IFI from Friday, September 27th.

Q. What Irish gangster series has Aidan Gillen appeared in?

Competition closes at midday, Monday, September 30th 2013. The winners will be contacted by email shortly after. (See IFI Terms and Conditions regarding prizes and competitions.)